I have enjoyed the response to a recently released piece entitled “Remount”. The genesis for the piece is kind of interesting. 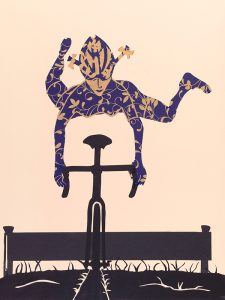 I have been fortunate in being able to display my work in a variety of venues from racing events to art galleries. At almost every event I have been asked about inclusion of women as subjects in my future work. Though I had more than a half dozen studies in various forms of development, it wasn’t until I was attending the Providence Cyclocross Festival that I found expression to a women’s themed piece. I had determined that I wanted to portray female cycling athletes in “full cry”, immersed in the intensity, speed and danger of our sport. I also wanted to make sure that any image I represented could only be viewed as distinctly female. However, I did not want to create some kind of sterotypical image of the “pink and shrink” variety. (A wonderful phrase borrowed from the woman who was at the Battenkill Races this year as either a Specialized Bicycle marketing manager or designer.)

“Remount” portrays the supreme athleticism required in the cyclocross discipline emphasizing this woman’s quickness, strength, flexibility and control. The pixie like body type and the flying pigtails affirm this athlete as female. The space between the rider and her saddle adds an aura of acceptance of risk and danger. But the space also provides a counterpoint showing flight and a certain grace of movement. All of this is what I observed empirically at Providence and what subsequently caused me to research dozens upon dozens of photographic of images related to female ’cross riders for this piece. I settled on the images of three prominent woman riders (who shall remain nameless since I do not have their permission to identify them) as inspiration but the final piece was totally “freehanded” from my memory of what I experienced at the event.

Copyright © 2020 · DUG Art · All Rights Reserved · Any copying and/or distribution of the artwork on this website is strictly prohibited by law. · Powered By Cider House Media
Contact Us