To those of us with long experience with cycling, the construction of custom bicycles has always had a special place in our esteem. One look at a Richard Sachs or a Peter Wiegle bicycle impacts the viewer with workmanship so precise and visually appealing that a jeweler’s artistry becomes the only parallel.

Several years ago this was the case as I viewed displays of numerous custom built product at the New England Bike Builders Ball organized by Eric Weis. Adjectives like sparkling, dazzling, detailed, intricate, and glittering and jewel like were mental descriptions reinforced time and again as I coursed the floor.

The evening left a vivid impression.

I wanted to express that impression in a piece for the Builders’ Ball the following year.

For the initial concrete form of “bejeweled” in the bike sense, I decided the most impactful way to express the jeweled aspects of the Builders Ball exhibits was to use – well – jewels. Hence, my selection of rhinestones. The initial study featured a rhinestone bike in relief on a multilayered tissue and acrylic background. The construction of this piece was exacting, laborious and very sticky. The process gave me an even greater appreciation for Mssrs. Sachs, Wiegle et. al., who work with considerably more materials than I do.

To honor these craftspeople, they needed to be represented in the final creation. Artisan II was the result.

My craftsman is completing an bedazzled rhinestone bike in relief. Artisan II was presented at a subsequent Builder’s Ball and during its debut I remarked to Mr. Weis that someday I would show up with an actual piece of bicycle “jewelry” of my own. 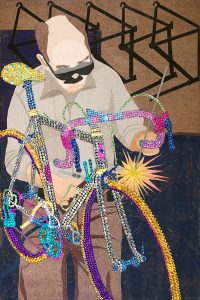 That is how “Bling” became real.  The construction of “Bling” is a story on education in the performance characteristics of two stage epoxy, the varieties and sizes of rhinestones, and use of latex rubber gloves congealed with both of the above

Bling started out life as a Cannondale team bike of an Italian pro, which I campaigned as a Masters racer. It was transitioned to a piece of art by stripping it of its Dura Ace componentry and, then, its coating of red paint. The latter process involved copious amounts of gel like paint remover combined with strenuous manual use of a paint scraper. 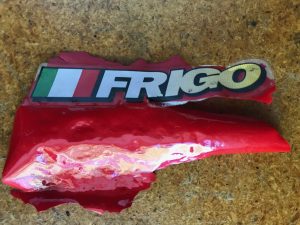 Once prepped, the process of rhinestone application began. Epoxy has a unique way of confounding the placement of the gems. Placement too soon on an epoxy coated surface and the rhinestone oozes  downward, wait too long and the gem freezes in place – almost immovable. So, sticky latex gloves or not when the moment of ideal adhesion arrives speed is of the essence. 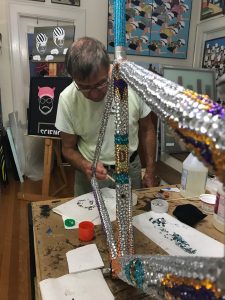 It is my hope that these artworks are symbolic of the true cycling artists, the builders of those amazing custom examples of fast, durable AND movable works of art.