What Keeps Me Going

When I began to think about this month’s blog entry, I was reminded of how important daily routine is in adding consistency and efficiency to my art projects. As we all have experienced this past year, very little in life has lent itself to the reliance on routine. Over the last several years the routine I had established was a pattern of working in spurts created by the need to have new, interesting and relevant work for every show and event we would be attending during a season. In 2019 we did sixteen shows, so I was happily “forced” to be in the studio on a very regular schedule. My “routine” was morning coffee with Michelle, planning the artwork for the day while still in PJ’s or jumping into cycling clothes and getting out on the bike. Post ride, I jumped into the shower, dressed and had something akin to brunch. Then into my studios for an intense five to seven hours of work followed by “wine:thirty”, dinner, and de-briefing with Michelle on her day in class (she teaches AP Chemistry and serves as a technical advisor to faculty on advanced teaching methods). Show weeks condensed all of the above and added packaging and prepping artwork, loading artwork into crates, then loading the van with artwork and show infrastructure travelling etc. etc. Of course, returning from an event reversed all of this and siphoning time. Our first shows are in March and the last at the end of November. So having a routine to rely on was both necessary and essential to be successful.

Then, COVID-19. From March of 2020 until May of this year - no events, no energizing face to face interactions with folks. There has been so much physical isolation.

Despite my best efforts, words like “routine”, “consistency”, “efficiency”, and “completion” couldn’t really be applied as the months rolled along.

Projects got done but they took longer than they should have and somehow were less satisfying when completed. In spite of this, over those very same months, I began to pay closer attention to social media and our website. I found I could be in positive contact with folks who have collected my work, those interested in purchasing results of my efforts and – many times – people just wanting to establish a conversation about a particular piece they had seen.  Thank goodness! There have been an amazing number of these contacts. Though unanticipated, they have gotten me back in “the groove”.

I could relate any number of good examples of electronic connections but three stand out.

I could relate any number of good examples of electronic connections but three stand out. First, our friend in Arkansas, Ben Tufford, a long time friend and collector helped us with the naming of a new piece

(“Cow Pow” was perfect). Then there are the folks who had listened to me discuss, at length, a couple of pieces at the Iron Man Lake Placid triathlon and ordered one of my cow series with the proviso that I provide them with a written explication of the piece they had selected. And, the third example is representative of something that has happened at our in person shows increasingly over the years. This example came in the form of photo images on the internet from yet another long time collector in Vermont. The photos he sent were the result of my completion of a series we call “Going Home”. There are actually two versions, one male one female.  Our collector had waited for the third in the female series  of “Going Homes” that I hadn’t finished in over two years. Though I knew what I wanted the third panel to be, somehow it just kept getting moved down the priority list for construction. Periodic emails of inquiry from the Vermonter, finally had their effect and I finished “Later” in two versions – the missing third panel. When he received his selection he sent along some photos of his now complete set. 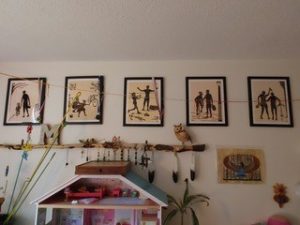 There are no words to explain the mixture excitement, humility, pride, and shear joy at receiving these photos. I’m so thankful he persisted in his request and very grateful for his taking the time to share those images with us.

As I mentioned, all of the above examples were internet generated but it is interesting to note how they parallel similar occurrences during our in person shows.   A couple with their two year old son came into the DUG booth at this May’s Battenkill Gran Fondo event. They mentioned they had purchased the “Going Home” set in anticipation of the birth of the little guy the wife was holding. After several minutes of wonderful conversation during which she. mentioned she was again pregnant. They then revealed the principal reason for their visit and almost simultaneously pulled out their iPhones. Their screens were filled with the framed set of “Going Home” placed in a prominent place in their home where “both of their children would grow up appreciating the work and what it represented to them”. Of course, you can imagine the impact being face-to-face with folks when they related something like this. All I can say is I’m blessed to be doing what I do.

And with this in mind, I realize that whether in person or through electronic communication the folks who I meet provide the vital creative energy that engenders routine, consistency, enthusiasm and completion. I’m back at it big time! Thanks to all of you out there.

Copyright © 2023 · DUG Art · All Rights Reserved · Any copying and/or distribution of the artwork on this website is strictly prohibited by law. · Powered By Cider House Media
Contact Us