Re-visiting Providence and the Cyclocross Festival

As many of you who have come into contact with me sometime in the last three decades (or more) know, I have been close to the sport of competitive cycling in a multitude of ways. I have assumed my knowledge base was fairly complete given both empirical experience and extensive reading of anything cycling related. But, nothing prepared me for Cyclocross Providence 2013. For the past decade cyclocross has been growing in numbers of competitors, numbers of events and in general awareness by the cycling community. Why this has occurred requires a brief visit to exactly what comprises a cyclocross event (especially for those of my readers who are more invested in fine arts than in bike racing).

First, the calendar for cyclocross has traditionally started after the bulk of the events scheduled for road races and distance riding have been completed. Racing begins in early fall and ends sometime in mid to late winter. Second, the courses used in cyclocross incorporate about a third paved surface, a third unpaved surface (i.e. dirt, mud, sand, grass), and a third made up of obstacles requiring dismounts and running (i.e. low barriers, short very steep uphills, stairs, unrideable mud or sand). Finally, the duration of races run from 30 to 60 minutes depending on the age and/or the expertise level of the competitors. The later two aspects of the sport seem to have particularly peaked interest by folks who are more “weekend warriors” than “in the sleek elite”. The perception by many of these folks is that cyclocross is safer than jousting with auto traffic and unforgiving road pavement that road racing demands. (I heard this often, but as I watched the events in Providence there seemed to be plenty of danger for risk junkies.) The other perception voiced by many is that shorter events don’t require dozens of hours of training a week to be able to be competitive. This is in stark contrast with road racing. Again, this sentiment was forwarded by participants who accepted not being in the pantheon of the elite “mudders”.

Providence was an explosion of events, racers, families and friends of racers, cycling industry representatives and a significant number of cyclocross “fans”. The sheer numbers of folks alone blew me away. I had no clue that the sport attracted this kind of interest. The numbers of event goers passing our portable art gallery over the weekend numbered in the thousands. Equally surprising, the numbers of families who attended smacked more of a BMX event where kids dominated the competition. Here, it seemed that Dad was entered but so was Mom and so were the kids – both boys and girls. 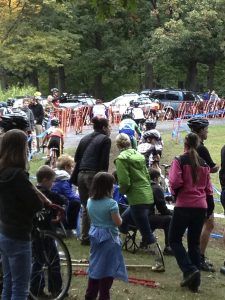 Each field was filled to capacity including the fields of both junior and sub-junior riders (cyclists from below 10 years old to 18 years of age and women at every level of expertise/age. This fact is in stark contrast with road racing were young riders are almost nonexistent and women’s fields rarely fill. The expertise and aggression of the women was thrilling to watch. They made for some of the best racing of the weekend.

With the large numbers of Cyclocross Fest attendees and the full fields of competitors it became clear why so many of the “movers and shakers” from the bicycle industry were present. Shimano, Trek, Raleigh, Kenda, Castelli, Stans No Tubes and Giant among dozens of other recognizable marques were present. Wheelworks, one of Boston’s preeminent bicycle retailers was right next door to DUG Artwork and did what looked to be a brisk business all weekend long. Also, there were also dozens of smaller and “new” cycling related vendors with a multitude of cool products. I was told there were over 90 vendors in the expo village. The size of the Expo was another happy surprise.

Pulling a term from my ancient hippie past, it was indeed “A Happening”! Oh, by the way the reception the artwork received was phenomenal and VERY gratifying. We did a brisk business all weekend running out of the Run Up giclees and several other pieces. Added to our business success was the fact that many old friends like iconic cycling announcer and ageless competitor Joe Saling, former Verizon team member Dr. Dawn Richardson, VOMax’s Peter Manning, and Shimano’s George Frick all stopped by for wonderful visits. 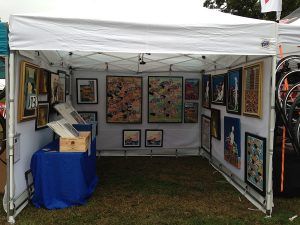 It was a weekend of surprises AND revelations. What wasn’t surprising was the unbelievable work of my partner Michelle Hurley. Michelle has competed successfully in the ‘cross sport and warned me about the “New World” of Cyclocross. She was accurate in every way. Additionally, her efforts in the preparation, installation and business aspects of the weekend for DUG Art are impossible to quantify. Suffice to say, thank goodness she was there to help me enjoy and to capitalize on this amazing weekend of cycling.