From my childhood reading the New York Sunday Times Sports which ran features like “the Bizarre World of European Sports” (circ. 1950s) on through all sorts of media, I have been entertained, educated, and amazed by the people, places and events that are part and parcel of our sport.

However, I have never ever experienced anything like the first 4 stages of this year’s Tour de France. As Jim McKay announced for decades in his weekly intro. to ABC’s Wide World of Sports “…the thrill of victory, the agony of defeat, the human drama of athletic competition” was never ever more in evidence than on the roads of Brittany starting on June 26, 2021.

Take the heavily favored Julian Alaphilippe who attacked at a seemingly impossible distance from the finish on the first day of the race. He catapulted himself from a group of the world’s best pro cyclists, any one of whom under normal circumstances, would have been able to chase him down, engulf him and blitz past him easily to win the initial stage. Yet, no one could come close. Wearing the jersey of world champion and carrying the weight of expectation of the entire nation of France on his narrow shoulders, he crossed the finish first monumentally!

It was an awe-inspiring moment, that would have singularly made the entire Tour memorable.  Then, Stage 2 took place. Mathieu van der Poel’s genetic 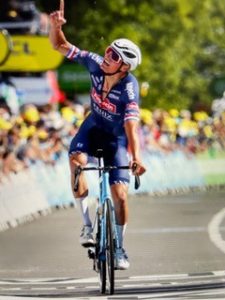 heritage runs directly through Raymond Poulidor. We all know now about Poulidor’s immense record of success at the Tour without ever wearing the yellow jersey. His grandson’s desire to wear it in honor of his grandfather was known to every pro in the peloton on Stage 2 – not to mention every member of the media and all of the rest of the fans of our sport. Mathieu, to achieve the “Yellow”, would be like Babe Ruth pointing to right field indicating he would hit a home run there to reward a sick youngster and then crush the baseball putting it exactly where he had pointed – a million to one shot. 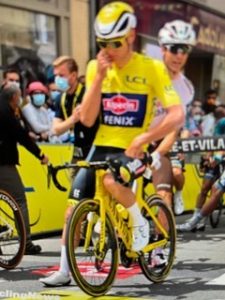 However, van der Poel would need to do it twice in a row having to win a time bonus sprint on the first lap of the finish line circuit and then winning the stage on the same severe uphill finish. He made the attack the whole world knew he would do and made the million to one shot of getting the bonus time. Then, attacked again – two million to one – and won the stage. Seeing this immensely tough kid sitting on the interview dais in tears after making such a super human effort just to honor his grandfather gave me chills while my own tears flowed. Surely this would be the highlight of this year’s Tour.

It was, until a certain “middle aged” sprinter whose physical and mental struggles over the last five years – five years! – had seemed to “put paid” to anything other than a recognition of his presence in the race at the beneficence of a nostalgic team owner, exploded out of the field to win the stage on the third day of this 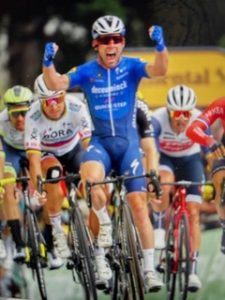 race. Mark Cavendish took his 31st stage win in a Tour de France. This legendary athlete whose winning almost seemed automatic if the parcours even remotely favored a sprint finish, who had been world champion and who had received every accolade a professional cyclist could have desired sat on the ground overwhelmed with the emotion we all shared with him. To be written off totally, only to come out of nowhere and prove the entire cycling world wrong and be the best among a new super generation of competition was absolutely incomprehensible.

“The agony of defeat” aspect of our sport was devastatingly obvious during the first days of this tour as well. But I won’t dwell on the crashes and the injuries that are almost too numerous to mention. What the Tour de France HAS done in its first week almost makes the words “the human drama of athletic competition” a phrase totally understating what has occurred on the roads of Brittany.