One of my most irritating character flaws – among many – is to make long “to do” lists daily with no realistic hope of completing them. And here is where the character flaw really manifests itself; I constantly find myself listing – and completing – the least important, most mundane tasks on the list. The important, critical, strategic items listed create mild panic, feelings of guilt, and even slight depression but seemingly never enough to actually address them. And, so it is with my blogging efforts. There is SO much to tell you all about the world of DUG Artwork. I literally have pages of ideas noted in my “bluebook” designed to be grist for my DUG blog mill. Yet, until this week, the impetus was not great enough to actually sit down and convey them to all of you.

SO why now, after a summer of abject procrastination have I actually sat down to do what has been an item on my “to do” lists for more than a quarter of a year? In a word – “YOU”!!!! Let me explain by describing one event of two that occurred this past weekend. Months ago Richard Fries the current voice of American cycling (whom I have known since he was a little Junior rider) approached me about displaying my work at two events in Providence R.I. I knew nothing of the first, the New England Builders Ball at the Biltmore Hotel and had only the most superficial knowledge of the second, the Providence Cyclocross Festival at Roger Williams Park. But, since we have had wonderful experiences at other bicycle related events, I was enthused about the prospect of being part of each of these. The friends, new acquaintances, viewers and buyers of my art finally pushed procrastination aside and have become the genesis for that next few blog entries.

The Builders Ball is essentially a gathering of a group of custom bike builders and bicycle accessory manufacturers/producers who get together once a year to show the products of their labors and enjoy talking about their commonality of interests. Additionally, it gives the public the opportunity to view the pure artistry of these products. After constructing the structures to display my work I realized that my work was not the only art in the ballroom. It is hard to describe the beauty, the jewel like qualities of the bicycles on display. The level of creativity would rival that of any fine art show. As I talked to several of the builders, I was impressed with the intersection of art and engineering that formed the theme of conversation among us. My impression of these folks was of a group of people whose level of creativity was only matched by their manufacturing know how. This was not lost on the “public” who attended the evening’s festivities. People lingered among the displays engrossed in the look and function of all that they were seeing. This made me very glad that I had created some pieces (Welder #1 and Welder #2) specifically for this event. These pieces portray the irony of the custom builder, that of building a rider to love and use their product – and vice versa. Our art showcase attracted more viewers and buyers than I ever anticipated. 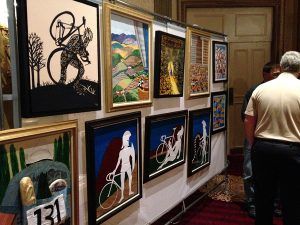 Of course, this was the main reason I was there. However, the byproduct of the evening was reconnecting with so many people who I have known through my long association with cycling. Conversations ranged from reminiscences based on long associations from my days competing and team directing through years travelling as an account manager calling on bicycle businesses throughout New England to more recent contacts with parents of current young riders of this new generation. In addition, there were enlightening and often hilarious interactions with folks who just “enjoyed bikes”.

It is impossible to come away from an evening like this without feeling totally energized and desiring to let as many folks as possible know about this event. Eric Weis the organizer and promoter of the New England Bike Builders Ball deserves immense credit for staging this event and I want to let the world know that, if you enjoy the sport of cycling and/or the utility of the bicycle be there next year. It is a not to miss event.

Look for my next entry when the world of Modern Cyclocross is presented to me. Thanks to all of “YOU” who compelled me to write again.